More photos by Greg Long can be found here 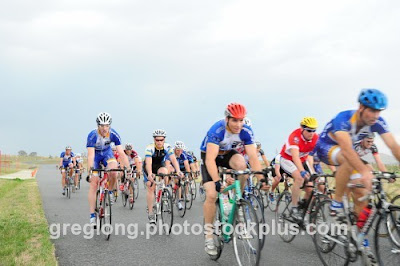 David Shepherd's report of Men's B Grade stolen from CCC website
Today I was tempted not to race: I'm heading to NZ on Friday for a tough week of orienteering races, the BOM radar said rain was on the way and I could still feel yesterday's intervals in my legs... But the team leader "You Me and Dapre" talked me into it (our other team mate Handsome Pete was sitting out today's race due to work commitments). I figured it would be a chance to try something new - sit near the back of the field and don't chase down breaks (and don't try and get in a break), then get ourselves into a good position in the last few laps and see what happens. So I smashed a can of rice cream and a coke and rolled out to Stromlo, the wind picking up as every minute slowly ticked by. By the time I got to the track there was a pretty nasty breeze and I was even more happy about the idea of sitting in. I told Dapre I'd pull out if it started raining, and on the first lap we got a few drops - but what I say and what I do are not always correlated... We rolled around for a few laps, there were a number of breakaway attempts but the angle of the wind (headwind on the back straight and tail wind on the home straight) made it hard to get away and every break was quickly chased down. After maybe 10 minutes it started getting wet and I got nervous about being too far back in the bunch so started moving forward with Dapre on my wheel. This luckily coincided with the race organisers decision to shorten the race due and we rolled over the line close to the front passing the 3 laps to go sign. Late in the next lap one of the Quon riders jumped off the front and the bunch seemed happy to let him go.

With a lap to go I decided to try and pull him in, with Dapre on my wheel, I was also quite keen to get off the front of the bunch coming into the corners in the slippery track. After a few scary moments losing traction on my back wheel we hit the back straight and I was 2nd or 3rd wheel, so I attacked and Dapre and a MACT guy came with me. The MACT rider then attacked us but we stuck on him up the hill and we caught the leader at the top. I was feeling pretty spent already but a short rest on the MACT riders wheel and the sight of the finish line down the hill got me pumped for my first sprint finish. I stuck on the MACT riders wheel until Dapre went around me and jumped for the line, then I realized i might have enough left to get around him too. Expecting the bunch to come by at any moment the Token Products team pushed over the line to take 1st and 2nd. The main field seemed to get slowed down a lot in the slippery corners which helped us out a lot. After so many weeks of trying different tactics which we always got wrong, we finally had some success. its tough to beat the big teams but when the bunch stays together like it did this time its anybody's race really. 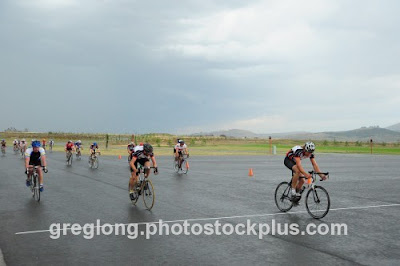