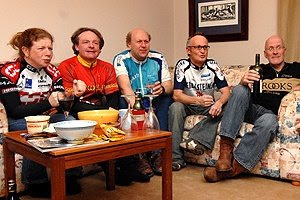 Tour de France fever has taken hold of Canberra as locals will Cadel Evans on to claim the yellow jersey at the Champs-Elysees on Sunday night.
Competitive cyclist Ally Roche, 36, has been following Evans and the large contingent of Australian riders in the Tour for the last three weeks.

And she hasn't been alone, with fellow cycling junkies regularly taking a place on her couch to watch the action.

The Curtin resident regularly dons the Team CSC jersey of Stuart O'Grady in her living room as she marvels at the skill and endurance of the riders.

On Tuesday night Ms Roche had a group of fellow cycling junkies in her living room to catch another stage.

''We have Tour de France parties, people come over for drinks and dinner and we sit down and watch the tour,'' she said.

The house Ms Roche shares with Allan Bontjer contains a special ''bike room'', with a collection of bikes set for training in the cold Canberra nights.

''I know how hard it is to climb these mountain stages and the people who do it are just machines ... especially for the people not on drugs,'' Ms Roche said.

The long-time cyclist and member of the Tuggeranong Vikings and ACT Veterans Cycling clubs said she often fell asleep during the late Tour sessions, needing sleep for her early morning training rides, but was back in the lounge room for the daily highlights.

Her well-earned slumber meant she missed some controversy as Evans appeared to headbutt a TV camera crew out of the way after finishing the Tour's 16th stage.

Evans waved the camera away, to little effect, then continued travelling forward, using his helmet to break clear of the media throng.

President of the Canberra Cycling Club Jason Parkes said the group had one of their largest ever turnouts for a winter race at the weekend.

But he said many regulars were absent from early morning sessions as diehards struggled with the regular late nights in front of the television.

''You find most of the cyclists don't do training in the morning because they've been watching the event the night before,'' Mr Parkes said.

Brent Miller, from O'Connor cycling shop Bike Culture, said he had noticed more cyclists on the roads presumably inspired by Evans and other Australian Tour riders. ''Business always picks up for that time before and after [the Tour de France], people think 'I'll dust off the pushy again','' Mr Miller said.

He expected sales of new bicycles and cycling merchandise to soar after the event finishes late on Sunday Canberra time.

I stole this story from the Canberra Times.

I cant believe it possible that Cadel is still there after the attacks. How would we have been wwith Stuart O on Cadel's team. Grear for ussie cycling??