Most of the talk and work revolved around 200 meter TT sprint qualifying line.

I did a time of 58.9s to finish 12th. Marginally faster than the NSW Titles, but under the magic 60 seconds which I hope to continue. Goal of around 55 for the worlds

I rode with Bill and Mark, being quite concerned about my dodgy arm and slow starts. My start was good and with Bill's encouragement we raced to 6th place 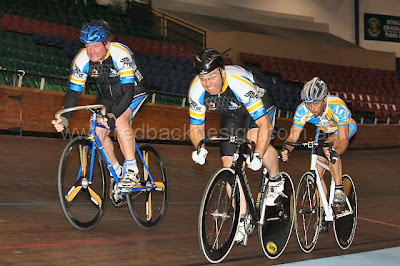 Could not handle the ultimate pace, that is more than 60kph for the sprints. Topped out at around 55-58 and chased back on with Michael O'Brien from Bicisport a good number of times. Could not get on by myself late in the race and pulled out to my disappointment

Was quite fatigued and was glad to only race 200 more metres. Goal of the day was to beat 13 seconds, bummer, rode 13.004, but I reckon I would have done better if fresh! 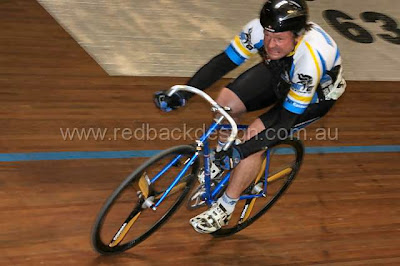 Tour of Tasmania on the road bike 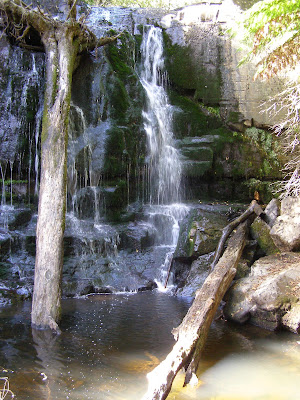 Waterfall near Lilydale
Launceston to Scottsdale via Lilydale 90km. A very windy day riding on the flat up the Tamar valley, finally turned off and then the hills started. Wonderful countryside with the road winding alongside an old narrow gauge railway. Would be a wonderful rail trail, being scenic and flatter than the road. Was very happy to find the Lords Pub in Scottsdale, got some supplies and lay in bed and napped, waking up to have mint infused lamb skanks in the pub for dinner, had a few beers and learnt quite a bit about forestry from a local pub guy at the bar.

Scottsdale to St. Helens via Derby 100km was a wonderful day of riding, a little cold, a little wet, but very pleasant. I met Kate and Tony along the way, they looked a little cold out of the car, but they were off to do the local sightseeing. Just after meeting them I was frustrated behind a slow truck down a 12km descent, a little disappointing after dragging my arse up all the climbs. 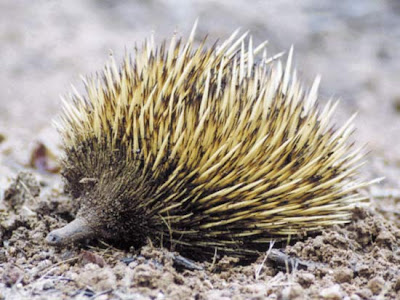 A highlight of the day was coming across a bunch (is that the right word?) of echidnas, I sat and watched them fossick, dig and feed for at least half an hour. They would stick their heads into the ground and poke their spiky backs into the air and any sense of danger. I got downwind and kept silent to watch them as I did.

Ohh, Derby is a great place for morning afternoon tea, with plenty of tea houses, cakes and home made stuff. I can imagine plenty of people I know looking around the arts and crafts stores, some antiques and having a nice tea or coffee. 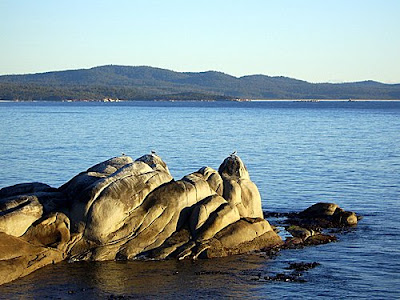 View leaving St. Helens on the way south
St. Helens to Swansea via coast road 120km was supposed to be a relief from the hills, it was, apart from a quite nasty head wind all day long. Wonderful coast though with pristine sandy white beaches, grass and cattle to the edges. Some fancy, fancy houses right up along the beaches and isolated headlands.

Swansea to Perth via Majors Town 125km, this day saw a climb from Swansea to Leake Lake Pass. The first 2okm flew past, from sea level to 840 metres actually. The climb went on forever, but I was greeted at the top by a pleasant couple from Queensland, doing the caravan thing around Tassie. We swapped a few tales over an instant coffee and some nice ginger snaps. I saw them later in the day in Majors Town, they were very surprised I had made the distance, but even then I had 40km more to go into the Perth/Longford area. The Midland Highway really flatens out, with heaps more traffic and big trucks. To counter that the highway is wide, with big verges to ride on. The big news of the day was a horrible noise emanating from the rear of my bike, I checked wheels, hubs, chain, but could not find the culprit. Got back on, same noise, a more comprehensive check revealed a big crack in the right rear drop-out.

So, what do I do? Ring Gary who kindly offered help. Call on Neil and Kaylene who were still in Tasmania. I looked for a welder around town for a quick fix, none on offer. So I sound a rudimentary hardware store, bought some glue and sat downto fix my frame while sipping a mercury cider. Well, the glue worked and I thought a tea spoon, duct tape and a zip tie would hold it all together. So, I left the bike to cure, went to dinner on deep fried chicken kiev, after I found out to my great disappointment that the kebab shop I saw was closed on what ever day it was. Did not sleep well that night, concerned about what the next day would bring. Would I make it to Devenport? Would I have to hitch, or maybe walk? Of course I could call on the cycling family all travelling in Tasmania.


The Spoon and tape 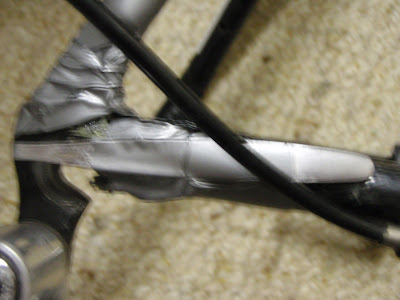 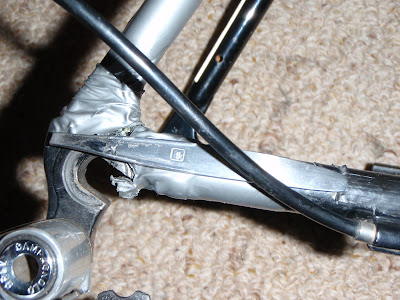 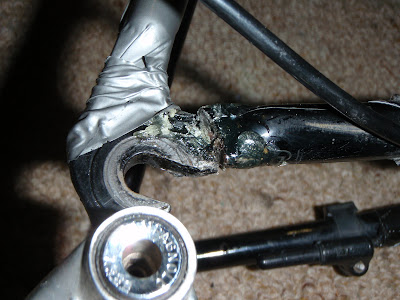 Perth to Devenport via Deloraine 100km was a slow day, I had to take it really easy following the spoon, tape and glue repair the night before. The repair was very successful for 2km, yes until I hit the first rut on the road. Good thing was I could keep on going, gingerly, only riding in the saddle with little power being applied to the pedals. At Westbury I had a good coffee and cake, discovered a huge hedge maze and finally decided I could make it to Devenport that day so I re-booked the ferry trip for that night. Luckily the Spirit of Tasmania had available cabins, which was nice as I was originally booked on the ocean view recliners.

I met Neil, Kaylene, Terry and Mark in Devenport and had a good dinner. Went to bed early in a non-vibrating cabin and had a very good sleep

Good Friday, arrive in Melbourne and say farewell to Neil and Kaylene who are taking my bike and gear home. Got myself a 4 day metcard, then trammed off to have a nice breakfast at Birdman Eating in Fitzroy and made it my mission to catch lots of trams and trains around the city