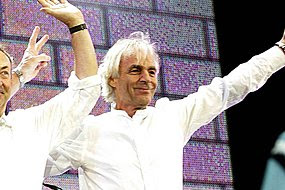 Pink Floyd keyboard player and founding member Richard Wright has died at the age of 65 after a short cancer illness, his spokesman said.

Wright died at his home in England on Monday.

Wright, guitarist Roger Waters and drummer Nick Mason founded the band that became Pink Floyd in the 1960s when they were students.

Pink Floyd went on to become one of the biggest names in rock.

"The family of Richard Wright, founder member of Pink Floyd, announce with great sadness that Richard died today after a short struggle with cancer," his spokesman said in a statement.

"The family have asked that their privacy is respected at this difficult time."

Wright co-wrote five songs on the Dark Side Of The Moon LP which was released in 1973 and spent 14 years on the Billboard 200 album chart to become one of the best-selling albums ever.

Wright left Pink Floyd after falling out with Waters during sessions for The Wall.

Posted by Allan Bontjer at 2:19 PM

I love the photo you chose. The few times the cameras landed on Wright at Live8, you could see he was having a blast playing. I am so glad in retrospect that the reunion happened. He will be missed.

I posted a tribute at my blog too, at http://isorski.blogspot.com/2008/09/pink-floyds-richard-wright-passes-at-65.html.

Hi Isorski, I liked your little bit on your blog. Yes, Richard lost interest for a while, but I think he was written out of some of the contracts. Only got paid for his bits. I'm mostly a fan of the band for all the bits pre Wish you were here, but did see them in 1988, Sydney. Bye, Allan